THE BEST. Having an almost one year old and an almost 3 year old, we go through produce so quickly. We get a produce delivery once a week and we all are so excited on Fridays when the box is delivered. The produce is always fresh and absolutely delicious. Even better than that, their whole team! Owning a family business myself, it is evident that they take pride and ownership of the business they have created. The owner has been responding to my emails directly and I have loved feeling like family from the get go! I can't say enough AMAZING things about GGO. Thank you thank you thank you!!!
read testimonials -Jillian K.
February 2, 2018
Recipe Home > Main Dish > Potato and Leek Soup 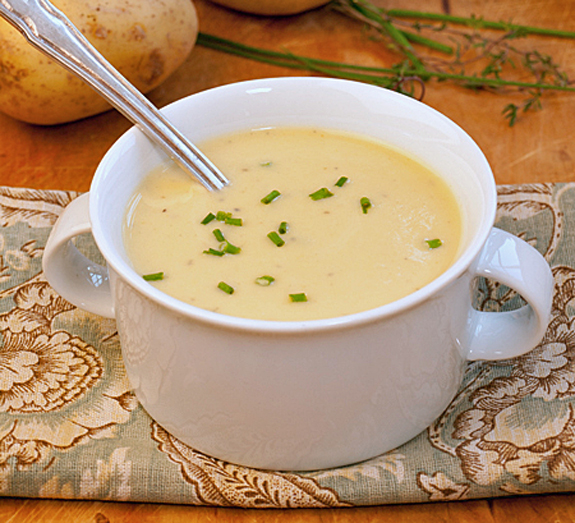 All Numbers Can Be Approximated.

7 cups of chicken or vegetable broth

salt and pepper to taste

(Optional Tip)- chop up a couple carrots, celery, etc to toss in before it goes bad. Don't be intimidated to adjust the recipe and ingredients to what you have on hand.

Cutoff just the ends of the leeks. Then cut the leeks in hald lengthwise and rinse under cold water.

Chop those rinsed leeks. Squash the peeled garlic cloves by placing your knife sideways on top of the garlic and pressing firmly on top of the knife. Then mince the garlic the rest of the way.

Chop up the poatoes into small pieces.

Melt the butter in a large soup pan then add the chopped leeks and garlic until golden. DO NOT BURN. Watch your heat until you add the broth.

Once leeks and garlic are sauteed to golden brown then add the chopped potatoes, broth, bay leaves, salt and pepper. At this time also and any other veggies or spices you desire to make the recipe your special recipe.

Bring to a boil then lower heat as much as possible while also placing a lid on the pan. Let the soup simmer for about 20 minutes or until potatoes are very soft or easily fall off of a fork.

Once the potatoes are dont then the soup is done cooking. Find the bay leaves if you can and remove them. Their job is done. Now puree' the soup with a blender, or mixer, or a hand masher if that is what you have. (Be careful of splashing: This is hot soup!

Add the heavy cream or milk to the pan and bring to a simmer (cook without the top on so water can evaporate) until the soup is as thick as you like.

If the soup is to thick you can add a little bit of water while it is simmering. Add a garnish if you desire.