Got some delicious stuff today! Not only do I enjoy the produce but the storage tips and recipes in your emails are awesome! 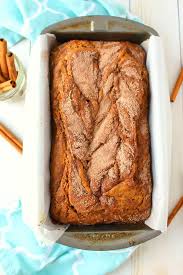 1) Preheat oven to 350 degrees. Spray and line (with parchment or waxed paper on bottoms) a 9x5 loaf pan. Set aside.
2) In a large mixing bowl combine the wet ingredients (zucchini, eggs, oil, yogurt and vanilla). Mix to thoroughly combine. In a separate bowl, combine the dry ingredients (flour, sugar, baking powder, salt, cinnamon, nutmeg, and cloves). Gradually sift the dry ingredients into the wet ingredients. Stir the batter just until all the ingredients are fully incorporated. Don't over mix, or you'll get large air bubbles in the bread.
3) In a small bowl, combine the cinnamon and sugar to create the cinnamon swirl.
4) Pour the HALF of the batter into the prepared pan. Top with HALF of the cinnamon sugar. Then add the remaining batter over the top of the cinnamon sugar, and spread evenly to the edges of the pan. Sprinkle the remaining half of the cinnamon sugar over the top of the batter. Using a knife, run it up and down the pan, and side to side through the batter and cinnamon sugar to create a swirl.
5) Bake at 350 for 60-65 minutes until golden brown, and toothpick inserted comes out clean and free of crumbs.
6) Let bread cool in pan for 10-15 minutes. Remove bread from pan, slice and serve. Store leftovers in airtight container at room temperature.

See if you're in our delivery area to get the local organic produce needed for this recipe delivered to your doorstep + use code KIWI50 for 50% off your first order!