Just recently I had the flu for the first time and had to miss a couple workouts. This is my experience with getting back into working out after the flu. It started with a crackle-ish tickle in my throat on Friday. Always, I’ve learned, an indication of something not-so-good on the horizon. It got worst over the weekend with more coughing. Then hacking up dark green stuff from my lungs. It is impossible to be inconspicuous when you are coughing that hard. Monday was busy and I had some responsibilities at Golden Gate Organics to take care of. Namely, I needed to create the weekly produce menu for all of our customers. Once that was complete I sent the weekly email to all of our customers and went home to rest. I was still a little sore from lifting on Sunday.

Going To The Doctor

The next day I went to the doctor. I thought I might’ve had bronchitis since it was similar to symptoms I experienced before when diagnosed. But it was the flu. “It says you didn’t get a flu shot this year.” The nurse politely said to me with a smug look on her face. This was the first year in memory that I did not get a flu shot. I thought I didn’t need one since I never got the flu before. Boy am I an idiot. “I’ve just didn’t have an opportunity to get one this year.” It was a lie. I coughed. The rest of the day wasn’t so bad.

The next day was Wednesday and I really felt my energy begin to drop. I met Steven, the president of Golden Gate Organics, at his house to work on a couple projects. Concentrating was impossible and my energy levels fell to zero. I would’ve fallen asleep if it weren’t for my incessant coughing keeping me awake and miserable. I called it a day at lunch and went home to be sick on the couch. Thursday, Friday, Saturday, and Sunday were spent quarantined in my bedroom alone. I couldn’t even find joy watching basketball on TV. Or sleeping. Never in my life had I ever felt as sick and miserable as I did when I had the flu. I felt bad letting Kyle, my workout buddy, know that I was not going to be working out after the flu got worse. We lift weights together every Wednesday and Sunday. Our program is STRONGLIFTS and I highly recommend it to anyone who wants to start getting much stronger. 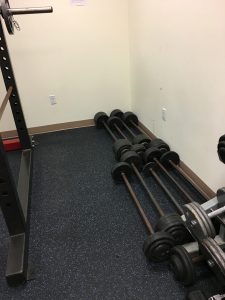 Kyle took my absence as an opportunity to rearrange some odd weights placed next to our squat station.

The Flu Is Up, My Energy Is Down

The Mercury News even reported that five people die of flu-related deaths this flu season. That, and flu season in California hadn’t even peaked yet. That’s me always an early adopter. I felt like I lost a few pounds after hardly eating for about five days. Fortunately, though, our organic grocery delivery came right on time Friday morning. I didn’t even know that it had been delivered. My wife, Jen, took care of it and took care of me. She is the best. I ended up taking Monday off after the weekend, then a half day of work on Tuesday. Wednesday night was workout night.

I still had my cough but it was under control. Coughing into my elbow became second nature and kept my hands clean for the next person. My energy levels were nowhere near normal. Still, I could’ve texted Kyle and said I couldn’t lift again. But I didn’t. I needed to get out of the house. I wanted to lift those weights. Starting over is the worst and I hoped I hadn’t regressed much. Sure I coughed during the workout. But so what? I know how to cough politely and people can see that.

My Advice On Getting Back Into Working Out After The Flu

So my answer to how to get back into working out after the flu is to just step back into your old routine. Definitely take it easy and don’t push yourself too hard. Working out after the flu doesn’t need to be hard and it shouldn’t be. This first workout or two back isn’t about staying in shape. It is more about getting back into the routine. The routine is the most important part of working out because without it you won’t steadily improve. You slowly lose the gains of working out when you don’t work out. But it won’t go away in a week. When you have the flu drink lots of water, stay away from caffeine and alcohol, and try to eat as many fruits and veggies as possible. You need to take care of yourself and get strong again. Then you can go party.