It used to be commonplace to show up at your local grocery store and expect just one aisle devoted to organic food products. That’s it. Nothing else. It was a fact that organic groceries were not quite en vogue for obvious reasons: cost, accessibility, variety, supply. They were only just trying to break out the “if it ain’t broke, don’t fix it” mentality of why we should do anything different with our groceries and go with this thing called ORGANIC. What was the big deal?

Well, a LOT Was a Big Deal With Organic Food. And the Trend Has Shown That the Organic Groceries Cart Doesn’t Just Come From the Specialty Store 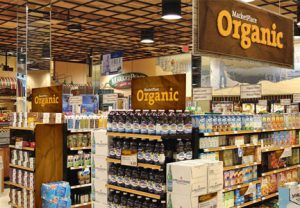 The trends are in. And no longer do you have to go to that specialty store for organic food. You know what we’re talking about — the little-known store off the beaten path with higher prices but better quality and selection. We’ve hit a breaking point: organic food, we think, is now making the mainstream, and here’s why:

2014 was THE year that 50% of organic food was sold at conventional grocery stores. That’s right: 50%. People are buying organics these days Plain and simple.

What kind of stores? Just about any you can think of:

You name it, increases in total volume sitting in your quintessential organic groceries cart at the chain store are the norm, which means all those stores will be getting competitive. Offering more selections, dropping some prices, incentives, you name it.

So If You Were Wondering If Organic Food Was Ever Going to Get Popular….

There’s your answer. We suggest you cash in on that, make it easy, and sign up with Golden Gate Organics, though! Saves you a trip to the grocery store chain, plus time waiting in a long line.