Think of LYFE Kitchen as a viral trend, but utterly good for you, healthwise. After all, LYFE Kitchen is a restaurant chain with a fast-food mentality, only they serve as much organic as they possibly can while emphasizing sustainability and even vegan sensibilities.

Here’s a Question: Do You Know of Any Other Restaurant Out There Other Than the LYFE Kitchen Selling “Vegan Unfried Buffalo Strips”?

You won’t find many. That’s just one dish the restaurant boasts. And they don’t play — in other words, they do not mess with any kind of meat whatsoever. Everything they serve is essentially vegan, with a touch of Greek and a lot of local raised fruits and veggies to boot. To make it crazier, this is a restaurant serving breakfast, lunch and dinner if you’re in the mood. 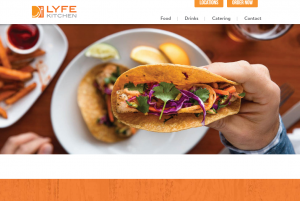 What’s for breakfast? Well, LYFE Kitchen can easily do tofu wraps, steel cut oats, dried cranberries and toasted almonds. That’s a fantastic way to start the day, all without having to eat a chicken or pig. Moreover, speaking of animals, those unfried buffalo strips are made with ‘chick’n’ strips (which are not made from chicken, believe it or not) get paired with some vegan antipasto or a quinoa crunch bowl, and you’re set for
the middle of the day.

But that crunch bowl isn’t for the timid. We’re talking about quinoa tabbouleh, some fresh crunchy veggies and fireman’s hot sauce drizzled over it, and you have a veritable stomach warmer of a dish without a single ounce of fat or meat. The key is the quinoa and other supergrains LYFE can get its hands on, because that’s how you get your protein fix, not by eating a hot dog.

And the Best Part? LYFE Is Sweeping the Nation….

Clear from California, to Nevada, then to Colorado and Texas — and then finally Chi-Town in Illinois. So it seems pretty clear: LYFE is trending toward the entire United States, and if the restaurant continues to turn heads, it’ll happen a lot sooner rather than later. It seems that for the first time, fast food will truly go organic in a big way, and the rest of the competitors out there will scramble to try and keep up.