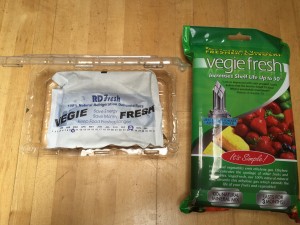 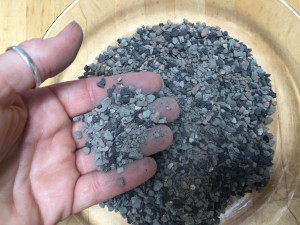 I stopped by the new Golden Gate Organics office on 50th Ave in Oaktown the other day to check out the new digs and catch up with Corey, and after a fun visit he sent me home with an armload of grocery products to try. I’ll be road testing them over the next few weeks and writing about them here, but there is one item I wanted to get to right away: Vegie Fresh, a mineral-filled pouch that you put in the fridge to help extend the life of fresh produce by up to 50 percent.

One of the biggest concerns for folks who subscribe to an organic produce box delivery is being able to use everything before it goes bad, and indeed the Bureau of Labor Statistics says that the average family of four throws out $1,500 worth of food each year. That’s bad enough on its own, but rotting food produces methane, a greenhouse gas that the EPA says is 20 times more damaging to the environment than carbon dioxide. Landfills are a major source of methane, and despite local composting programs, food waste is still a major component of landfills.

Decreasing food waste by extending the shelf life of fresh produce is a great way to take personal action on climate change, and while it might seem gimmicky to some, the science behind Vegie Fresh is well grounded.

The Vegie Fresh pouch contains 100 percent natural minerals, including zeolite, to absorb and trap ethylene gas and keep it from circulating. It’s a simple and elegant solution that really works.

After putting Vegie Fresh in my crisper, its effectiveness was apparent within days – no more mushy cucumbers or withering strawberries; no more slimy bell peppers or green onions in need of daily grooming. Why this stuff isn’t a household name is a mystery to me, but according to a vendor search on the company’s website, Golden Gate Organics is the only place in the East Bay or San Francisco that you can get it.

The package claims that Vegie Fresh is effective for three months, but I’ve tested it out and can happily report that it works much longer, especially if you take care to separate high ethylene items (most notoriously, apples) from the rest of your produce.  When it finally gives up the ghost (don’t worry, the mushy cucumbers will let you know!), simply open the packet and spread the minerals in your garden or add them to your compost – it makes great fertilizer.

We all have the best intentions when it comes to eating healthy organic produce, and using Vegie Fresh will give you some extra time to make good on them. It really doesn’t get much more elegant than that.

Check out the Vegie Fresh website for a deeper explanation of the science behind the product and the mechanics of food spoilage, and for additional tips on how to reduce food waste and properly store fresh produce, take a peek at our archived blog post, “How to Save Limp Lettuce and Keep Celery Snappy.”