Mince no words (only garlic and onion) when talking about Chipotle Mexican Grill. Yes, this chain’s arguably the largest chain of its ethnic cuisine, but also the one going through the most tumult given e.coli stuff and food safety concerns plaguing the establishment. It’s not stopping the Mexican juggernaut from touting the biggest USP its still pushing to this day, which may be one of the reasons why stock shares in the venue still are decent despite the negative reviews.

What’s That USP? Nothing But the Fact That Chipotle Mexican Grill Right on 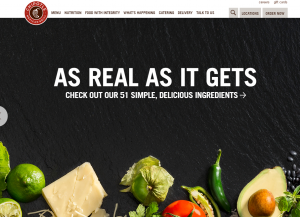 A major commercial chain — supporting sustainability — dare we say, organic quality? Who knew? In fact, their website states that all the meat from animals is ensured to be raised with no antibiotics or added hormones, hence organic meat. Additionally, organic and local produce is a big winner for them “when practicaly, so Chipotle has proven that a fast-food chain doesn’t even have to be die-hard organic to support it.

The company’s even placed solar panels on their buildings, using low-VOC paint and energy-efficient lighting. With all paper products made from unbleached material, you’re guaranteed a fully green restaurant with organic tendencies.

Granted…. It’s not a solely dedicated organic fast-food restaurant. But Chipotle Mexican Grill certainly can be named as the first fast-food restaurant to support and launch an initiative toward better health. We’re wondering if it had anything to do with the food safety scandals and claims. A blessing in disguise?

It may seem like only a matter of time before organic food and groceries hit the mainstream (for some, it already has). Couldn’t come any sooner. To this day, the United States may still be the most obese nation in the country. With these kinds of initiatives, though, that may soon change.