You read that correctly. Soup. It is possible. If you were to check this article out on celeriac, though, you’d be even more surprised given how the weird “veggie” looks like. It’s not exactly a vegetable, per se — it’s a root. So, naturally, when it comes to roots, you typically think they’re often used as seasonings when ground to a powder or shavings. Not so. Celeriac can be used, in fact, as much more —

And, in This Case, Celery Root Soup is a Real Winner 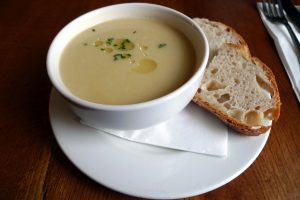 A winter soup, of course, featuring some hearty notes to it. The great thing about celery root is that it’s so hearty. It’ll fill you up. And in the winter, that’s crucial for us to get filled up while we hibernate like bears. Take note: this soup’s relatively easy to make as long as you have all the other necessities. And you’ll thank us later:

First off, what goes well with celeriac? Potatoes, of course! Hence why you can use both in a rich, hearty, warm, thick, and almost meal-like soup. Potatoes often go well with soup, so all you need to do is slice them up as well as some cubed celeriac, some leeks, a healthy amount of butter, and either chicken or veggie broth. Simmer it all until tender. But don’t stop there….

You have to puree the entire concoction. Or else you’ll just have a stew. And it really won’t have much body to it. A soup has to have a lot of body to it. Mix it up and throw in some cream for a little extra thickness. You want this soup to slowly drool off your spoon — not ‘spill’. Add a little lemon zest for that bit of a kick, some chopped fresh parsley, crispy croutons, and you’re good to go.

Well, it could be. Add some protein in there, and you’ve got a meal. And you’ve also used up that celery root for good use. Because guess what: that soup can freeze and be stored! Mmmm…. For more goodies, just check out the Golden Gate blog. We promise — you won’t be disappointed.