You might’ve already seen a decent listing of California organic farms right here. If that’s the case, more power to you, but perhaps you’d like a little more depth in one of the oldest farms in California supporting sustainability, freshness and reputation for organic foods, and that’s this little place: 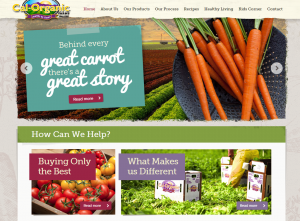 And that’s not just short for “California Organics,” but a main staple of what they herald as sustainable farming since 1984. Long time to perfect their processes and ensure the Earth can still yield the best of the best in terms of food, right? Cal-Organics sets one of the highest standards with a team approach and such an informal work environment. Think of family, almost. Anyway, you’d half expect they know what they’re doing if they’ve been around that long and are still producing produce that’s top notch.

Morever, the organization literally only started with just a quarter acre of lettuce. That’s what’s astonishing, really. Fast forward three decades later, and we’ve got a company here with about 60 different seasonal and year-round veggies and fruits to choose from. And they’re all organic.

Want to Learn More About Cal-Organics?

You can. They do have a website. Even after starting up in 1984 when computers were only just starting to get cool, Cal-Organics has stayed ahead of the times and kept with the trends, expanding in so many different valleys and regions of California that it’s astonishing.

You can’t beat Cal-Organics. As far as California organic farms and foods go, their reputation’s second to none. Learn more about them right here on their website.