In all fairness, if someone already has cancer, we concede this important fact: beets won’t get rid of it. One thing’s for sure, though: beets will certainly prevent the onset of cancer! But that’s not all: the benefits of beets go far above the threat against cancer, and we’ll get to cancer in just a moment. You’ll freak when you find out why beets beat out cancer so easily….

First Off, Beets Are, in Fact, an Anti-Inflammatory

For those understanding the environment quite well, you’ll know what inflammation’s all about. Everything from asthma, to head colds, to an enormous assortment of ailments plaguing the human race. And it’s all about inflammation. Thank the organic gods 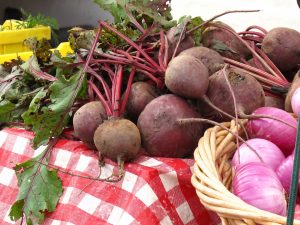 that beets are quite the anti-inflammatory food, capable of protecting your cells, proteins and enzymes.

How do beets do that? Simply put, beets contain a unique source of betaine, a anti-inflammatory nutrient capable of eradicating the nasties from your system in true form. This includes the C reactive protein, interleukin-6 and tumor necrosis factor alpha. Now we know that sounds all science fiction-y, but all you need to know is that the entire combination we just mentioned to you is responsible for benefiting the entirety of your cardiovascular system. In other words: eat beets, breathe easier.

What a Way to Detox!

What stinks about the world we live in is that we’re constantly bombarded by toxins all around us. That’s why we have that immune system. Our lines of defense are designed to protect us from the worst. The great thing about beets is that the betalin pigments you find in them actually help support your body’s phase 2 detoxification process.

When you accidentally or just by happen chance ingest anything that’s considered a toxin, your body will break it down much faster than when low on the nutrient beets are rich in.

And Thirdly, Beets Beat Out Cancer, Because….

In fact, research proved that beet root extract actually reduces tumor formations when combined with drinking water. The study was conducted with animals, so there’s no doubt that it would also have a similar effect on humans. In fact, beet root extract is being studied for human pancreatic, breast and prostate cancers. Remarkable.

Well, now you know that beets beat out cancer, among other things. There are a ton of other benefits of beets for you to know about, so click right here and find out. Without a doubt, though, these specific reasons are enough clout to prove that beets are beasts in the health industry. Rawr.