Northern California supports many different growing seasons at the same time due to a wide range of micro-climates. These micro-climates are created by ocean air interacting with the coastal hills and mountains. This environment lends itself to an abundance of local farms. In the Bay Area leeks are available year round, due to the mild winters. These often overlooked vegetables are packed full of nutrition, delicious to cook with and are easy to store. 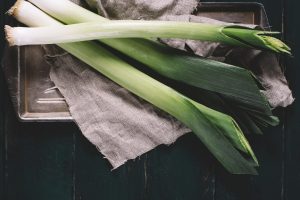 So, what ARE leeks?

Leeks are alliums like onions and garlic, but unlike their bulb-shaped cousins, the leek produces a long cylinder of leafs. Bay Area leeks have a milder flavor than most onions, as yellow and red onions have higher concentrations of sulfuric compounds like pyretic acid. Leeks are high in potassium, calcium, iron, and phosphorus as well as vitamins A, B1, B2, folate and C. They also contain sulfur which has been found to have antibiotic qualities.

How to use them

The subtle flavor of leeks is complimentary to many recipes because they don’t overpower other ingredients in the dish. The white and green portions of the stalks are used most often to add flavor to soups and stocks. The dark green, densely nutritious, leafy part can be used finely chopped in sauces and salads, as you would scallions, to provide extra flavor and nutrition. Try this simple Slow Roasted Leek recipe or this soothing Leek and Potato soup recipe.

Fresh leeks will keep for between one to two weeks when stored unwashed and untrimmed in the refrigerator. To clean, cut the leek lengthwise to just before the green fan and open the stalk halves under cold running water. Open each section with your fingers, allowing the water to rinse all the sand and dirt away.

Excited to try cooking with these tasty veggies? Click here to get farm-fresh, organic Bay Area leeks delivered to your doorstep.