It’s true, actually. What…. You don’t believe us? We don’t blame you. After all, the one thing that remains to be the standard of baking is the fact that you need grains. Flour. Even eggs. A lot of that stuff contains gluten. One would think that saying baking can be gluten-free is like saying being sick with Pneumonia isn’t a big deal! Look…. If you’re going to go gluten-free, at least go gluten-free with style, pizzazz, and a little flavor! It’s not asking for much….

First off, there’s a little something called almond meal flour. Never heard of it? Most haven’t. The amazing thing about this type of ‘flour’ is that it’s made from almonds, a nut as with all other nuts that is completely gluten free. Regular flour can be gluten-free as well, only low on protein. When it comes to baking, though, you need that protein. Baking can be gluten-free with the 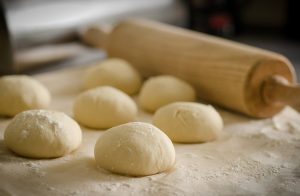 protein, though, as long as you go with some sort of nut meal. Other options include chickpeas and quinoa, believe it or not. You just need to know what to look for, and your basic staple of baking’s all taken care of!

Then there’s something called GF ‘pastries’. You use these GF pastries to make tarts without having to use any of the shortbreads typical for that. As we know, shortbreads are also rich in gluten. All you need to do to get creative with it is get some good ol’ cookies labeled gluten-free, or biscuits for that matters, break it all up and combine with some melted butter. You get something very similar to the shortbread we all love, but without the gluten. It’s simple. Then all you need to do is mix it in with the tart shell, chill it, and then it’s ready for the love.

And When You Think About It, Just Based on That…. The Sky’s the Limit!

Your scope just increased by 110% there. You’ve got the flour substitutes taken care of. And you’ve got the shortbread stuff handled in short order, too. Talk about options for going gluten-free. Now we’ve got baking taken care of. Let’s celebrate with some cakes!